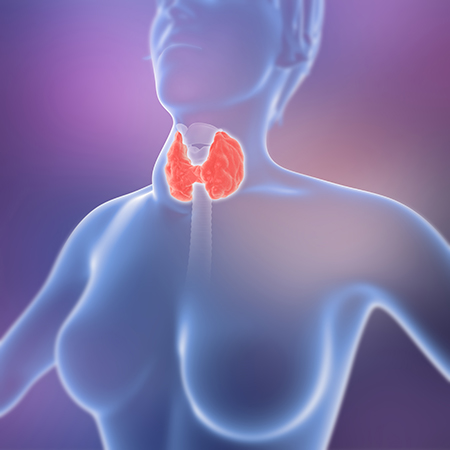 Many common problems such as fatigue, depression and difficulty losing weight can be due to low thyroid, however, many people, especially women, are not getting the treatment that would be of great benefit. This is because low thyroid levels are often not picked up by the standard TSH, T4, and T3 testing, which is the only testing done about 90% of the time.

New studies indicate, however, that the ratio of active thyroid hormone, T3, to the T3 blocking hormone, reverse T3, must be measured to accurately determine an individual’s true thyroid levels. This can often reveal a problem of hypothyroidism even though the standard tests are normal. This test is rarely done even though this is the most important determinate of thyroid function. Individuals on thyroid hormone also often receive improper doses, usually too low, when the TSH is used for dosing.

There is mounting evidence that hypothyroidism is present in the majority of and possibly all fatigued patients. The problem is that the standard blood testing that consists of TSH, T4 and T3 does not detect it. Many patients are told over and over again that their thyroid levels are fine. TSH is secreted by the pituitary in the brain, telling the thyroid to secrete T4, which is not the active thyroid hormone. T4 must then be converted in the body to the active thyroid hormone T3. When T4 and T3 levels drop, the TSH should increase indicating hypothyroidism. This is the standard way to diagnose hypothyroidism. However, there are many things that result in hypothyroidism but are not diagnosed using the standard TSH and T4 and T3 testing. This method misses thyroid problems with patients 90% of the time. 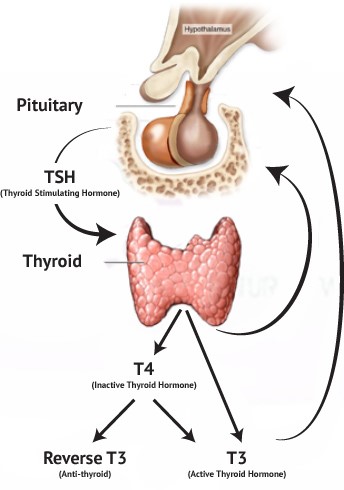 First of all, there is clearly pituitary dysfunction from a variety of causes, including viruses, bacteria, stress, yeast, inflammation, toxins, pesticides, plastics and mitochondria dysfunction. This results in low normal TSH levels along with low normal T4 and T3 levels. Very few doctors understand the significance of this and incorrectly state that the thyroid is fine.

In addition, many patients do not adequately convert T4 to the active T3, resulting in low levels of active thyroid hormone and suffer from low thyroid despite having a normal TSH. Also, there is another problem in that T4 cannot only be converted to T3, but it can also be converted to reverse T3, which is inactive and blocks the thyroid receptor. Very few practicing physicians consider this, but it is a major problem. There is an evolutionary enzyme that increases the T4 to reverse T3 in times of stress and illness. This worked well for our ancestors because in times of famine it allowed those who had this enzyme to survive. But in our modern society, reverse T3 works against us causing fatigue, difficulty losing weight, brain fog, muscle aches and all the other symptoms of hypothyroidism.

Reverse T3 can be increased with chronic illnesses such as Chronic Fatigue, Fibromyalgia, yo-yo dieting (often responsible for the quick weight gain after losing weight), stress, heavy metals and infections commonly present in chronically ill and immune deficient patients. Low thyroid not only results in undesirable symptoms, but it also increases the risk of heart disease and cancer. When more extensive testing is done, these patients are so relieved to be shown on paper that their thyroid is truly low and that they can expect to be feeling better soon. There are only a few labs that can accurately measure reverse T3. It is difficult for labs to do and many labs will improperly indicate normal or low levels of reverse T3. Some doctors that have ordered reverse T3 on patients have found it not to be useful because they are not getting accurate results or they don’t know how to interpret the results.

In addition, there is also a thyroid resistance syndrome found in these patients, meaning that there may be thyroid in the blood but there is no thyroid effect. This has been discounted in the past, but more and more evidence is surfacing proving that this is indeed a significant problem with these conditions.

The combination of factors, including pituitary dysfunction, high reverse T3, and thyroid resistance, results in many patients having inadequate thyroid effect. The treating physician must know when to use a T4/T3 combination or straight T4. Along with thyroid medication, vital nutrients like B12, Selenium, magnesium and others must be of proper levels to support thyroid medication and help restore proper thyroid function.